Being a judge: a career, a calling

Few professions in our society are as respected as Judges. But who are the people behind the gown and the gavel? Meet Tamara Bogdanovic – the Administrative Court Judge in Zagreb, Croatia. She has been seconded to the European Court of Human Rights in Strasbourg as part of a project funded by the Norway Grants. 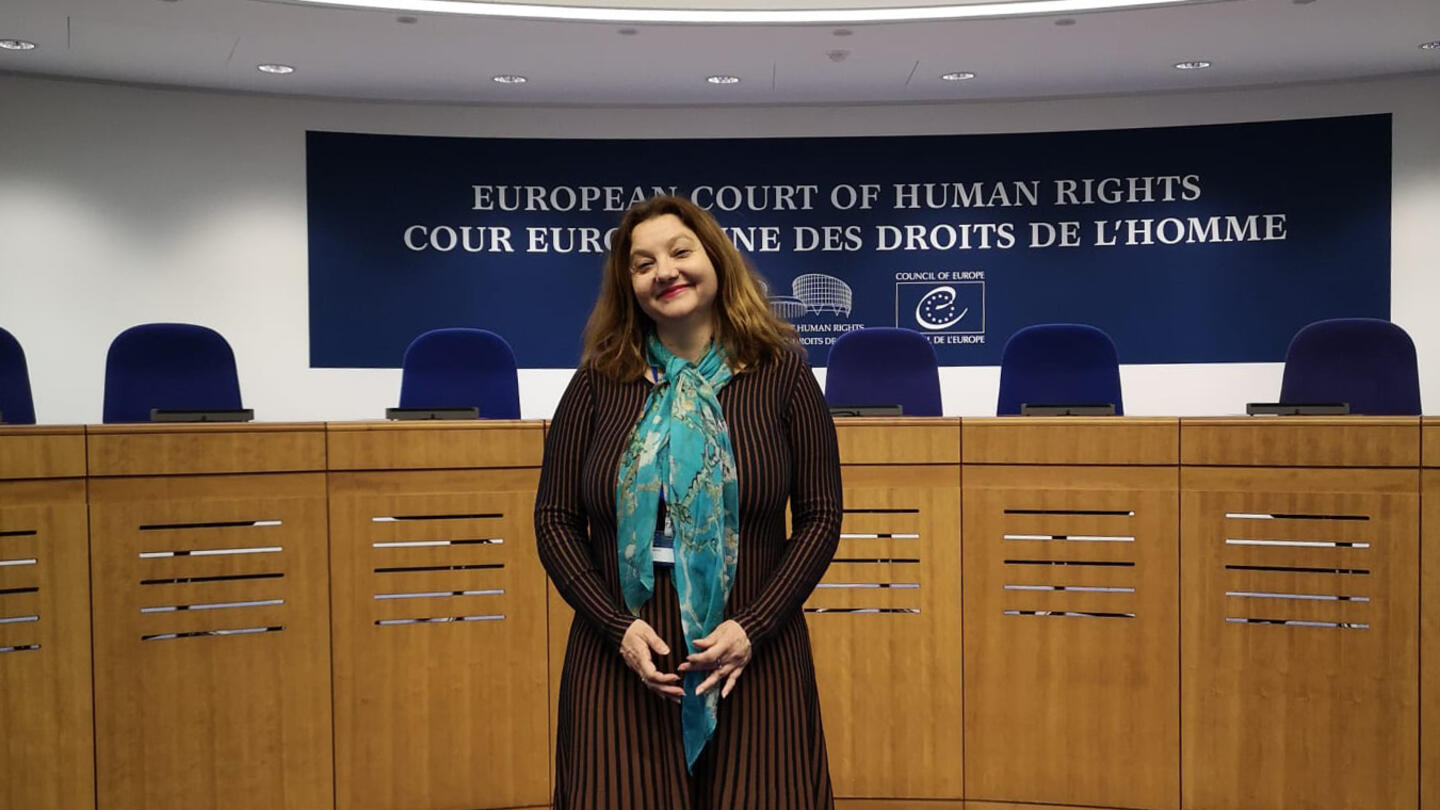 Tamara Bogdanovic in Strasbourg, from her personal album.

The secondment of Croatian judges to the European Court of Human Rights is part of a Norway Grants-funded project, “Reconstruction of the Municipal Court building in Split and promotion of e-services”. In addition to reinforcing the physical infrastructure of a courthouse in Split, the project aims to improve judges’ capacity to ensure and uphold human rights during court proceedings. The project is implemented in partnership with the Norwegian Court Administration.

Who is Tamara Bogdanovic?

I am one of the judges at the Administrative Court in Zagreb, Croatia’s capital, and I really enjoy my work.

I started my legal career as a young lawyer at a law firm, a legal counsellor at a bank, and then a court counsellor at the High Administrative Court. I became a judge on 1 January 2012.

In my studies, I specialised in European law. I am currently in the final stages of my LLM thesis, where I focus on avoiding excessive legal formalism. I am looking for ways to ensure that there is no discrimination in administrative law. For now, that is my most significant interest. [Smiles]

I am a nature lover and support all ecological efforts to preserve nature in its original form. I think that sustainable development is the only way humanity can lead a healthy life and protect optimal life conditions for future generations.

How did you become a Judge?

I always liked reading, writing and solving problems, so my goal was always to be a valuable member of society. This, in hindsight, explains why I became a judge. However, it happened almost by chance.

Twenty years ago, while working at the bank, I realised it didn’t make me happy. Meanwhile, my experience at the law firm was the opposite – it was stimulating and independent work. So, I started looking for a change.

My experience allowed me to apply for a court adviser position at the High Administrative Court – a job I held for eight years. While administrative law wasn’t my first choice, the job changed my mind.

I have been a judge for ten years. I can say now that I am fascinated by administrative law because there are so many different disputes between citizens and the State to be solved with so many different laws to apply.

There are many new situations because the government is constantly making new laws. And then we have to cope with the practice of Luxemburg, the practice of Strasbourg… It is a creative job, and I feel that with my rulings, I can both help people and teach the administrative bodies to do their jobs better.

Being a judge – is it a career or a calling?

It’s a balance of both.

It is a career because to become a judge you must take formal steps up the ladder to reach this position. I had to pass the bar exam and have at least four years of experience in the legal field before I could even qualify to become a judge in Croatia.

But you also have to have a calling. Like in any other profession, I doubt you will be very good at your job if you don’t like it.

The thing is, you don’t really have to know whether it is your calling from the get-go. I found myself in this job even though it was not planned.

You clearly have a passion for administrative law. Can you tell us what that is?

It is tough to describe administrative law.

The easiest way to understand it is that administrative law regulates everything that the authorities at all levels do. Administrative law defines how you will get your birth certificate, citizenship, identity card or passport, or, for example, at what age and under which conditions you would be entitled to your pension. It also determines what kind of taxes you will have to pay for any economic activities or under which conditions building permits can be issued as well as any other permits for your business or residence.

Let me give you an example. You want to build a house.

After High Administrative Court, the Constitutional Court is the last instance in Croatia before filing with a European Court of Human Rights.

What are the fundamental principles that form your decisions?

The main principle that forms any decision I make in the courtroom is the rule of law because the rule of law means that no one is above the law. The law should be applied to all citizens equally.

However, I also need to consider the continental law tradition applied in Croatia and Europe. That means that the judge’s task is to review the norms, interpret the law and then judge whether the law has been applied correctly.

You can’t just apply the law without interpreting it. If only because the facts of life come in so many variations that are seldom the ‘norm’, and that’s why the interpretation of the law is paramount.

We witness that the precedent-based legal system influences the continental one through decisions made in Strasbourg or Luxembourg. More and more, we see ourselves consulting or invoking earlier judgements to ensure equal treatment. So, in a way, we are combining the two practices when making decisions in courts.

What does your working week look like in Zagreb? What kind of cases do you make judgements on?

Well, in Croatia, a judge’s day can be very intense. Generally speaking, citizens like to litigate, and we have too many cases. That means that, sadly, I do not have all the time that I would like to have to spend on each case. But you cope with what you can do.

Every week, I spend one or two days preparing the cases. That means sending hearing invitations to the involved parties, reviewing their claims and supporting documents, communicating with lawyers, etc. Preparation takes much work, but lawyers and sometimes government officials help by providing documentation supporting their cases. They also know relevant laws and cases that make the job easier.

I also spend at least one day a week in hearings. If the case is well prepared, only one hearing is enough to make a ruling. Usually, I make five to six rulings a week.

Let’s discuss your journey to being seconded to the European Court of Human Rights. Why did you make that choice?

I never followed a strict career plan to get me to spend one-year practising law at the European Court of Human Rights.

However, in my work in Zagreb, I often have to apply the European Convention on Human Rights, as its proceeding principles are included as the main principles in the Administrative Dispute Act. So when one day, an announcement for the secondment popped up, I decided that this could be an excellent opportunity to learn something new.

After all, a change is always good.

The atmosphere at the ECHR is excellent despite the COVID measures in wintertime. People are warm and welcoming and very professional. I feel pleased with my decision to apply.

In the Administrative Court in Zagreb, I had cases that I judged on myself. Here, the principle is different. The cases I work on already have had first-degree judgements, second-degree, and finally – national constitutional court decisions.

My job is to filter administrative cases, to write a proposal of single judge note in the cases it is considered that Convention is not breached, to make a proposal on which cases should be registered and sent for a government’s answer, and finally, to prepare a proposal of judgements to be decided in Committee or Chamber of ECHR. Finally, I ensure that the cases that will go to the judge are prepared well in terms of facts, the law and existing precedents.

At the ECHR, around 90% of cases are rejected in the single-judge decision procedure. Only 10% of them are sent to be decided by the Committee or Chamber, and sometimes even before the Grand Chamber.

What are your goals at the ECHR?

Well, I wanted to learn more about the practical application of the Convention. I wanted to see more cases than I have seen in Croatia, and I wanted to be more able to get to the complete picture on which grounds to apply convention. For instance, how the decisions are reached on when the right protected by the Convention was breached or not.

Can you share the key learnings you feel you can directly implement in your work in Croatia?

I always liked the idea that law is weighing principles. Working at the ECHR only confirmed this statement. I saw clearly that this is the essence of the way ECHR works.

Why is the party unsatisfied? Does the decision comply with the law? Have all the procedural requirements been applied, satisfied and respected? Questions like that help us weigh different aspects of the cases and make the right judgements.

See what funding opportunities are available in Croatia