According to Eurostat, one out of every five children in the European Union are at risk of poverty and social exclusion. The pandemic has only exacerbated this existing problem. The Wave by Wave project in Portugal uses the innovative ways of surf therapy to tackle these issues of exclusion and trauma among children. 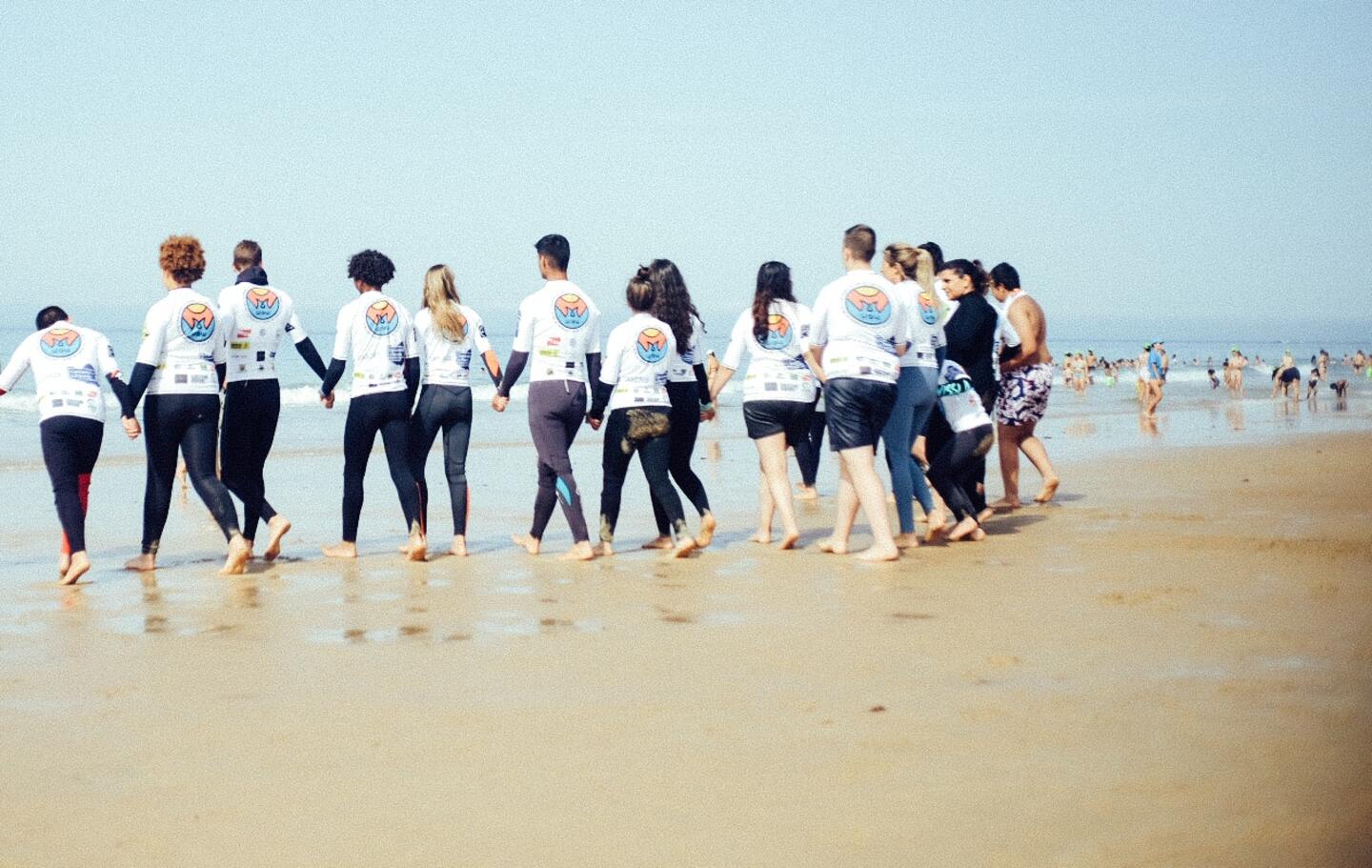 Thinking outside the box

For the past six years, Wave by Wave has intervened with Portuguese children in need or at risk of social exclusion. They have provided psychological support through so-called nature-based interventions, namely surfing. “Surfing can be used as a social tool, for social good. Even as a mental health mediator this was something that intuitively I thought was very clever. I had worked with many kids from very difficult backgrounds, and I had always felt that the traditional setting does not fit every person. With these kids, you often must think outside the box,” says Ema Shaw Evangelista, clinical psychologist, and co-founder of the Wave by Wave project.

Wave by Wave is operated by the Surf for Good Association, which was founded in 2017 by Evangelista and the former national surfing vice champion José Ribeiro Ferreira. Part of the project is funded by the EEA and Norway Grants, through the Active Citizens Fund programme in Portugal which funds independent civil society.

“Portugal is the country in Europe with the highest rate of institutionalisation. This means that we do not have enough foster families, we have foster institutions that tend to become very dysfunctional. They have too many children, not enough support, not enough supervision. […] In the past couple of years, they have improved. But it is from within these institutions themselves that the clear message comes that institutionalising these children is not the answer, we are re-traumatizing them.” This is the situation in which the Wave by Wave project operates, as Evangelista explains. The project introduced surf therapy to children in these institutions in order to support them and provide them with essential stability. Surf therapy has gained ground in recent years, as many mental health practitioners have underlined the power of the ocean as a therapeutic intervention.

Surf therapy has been provided to children at risk, war veterans suffering from post-traumatic stress disorder, individuals on the autism spectrum, and many others. The International Surf Therapy Organisation, of which Wave by Wave is one of seven founding members, currently contributes to research on the effectiveness of surf therapy and advocates for its increased awareness and acceptance as a mental and physical health intervention. 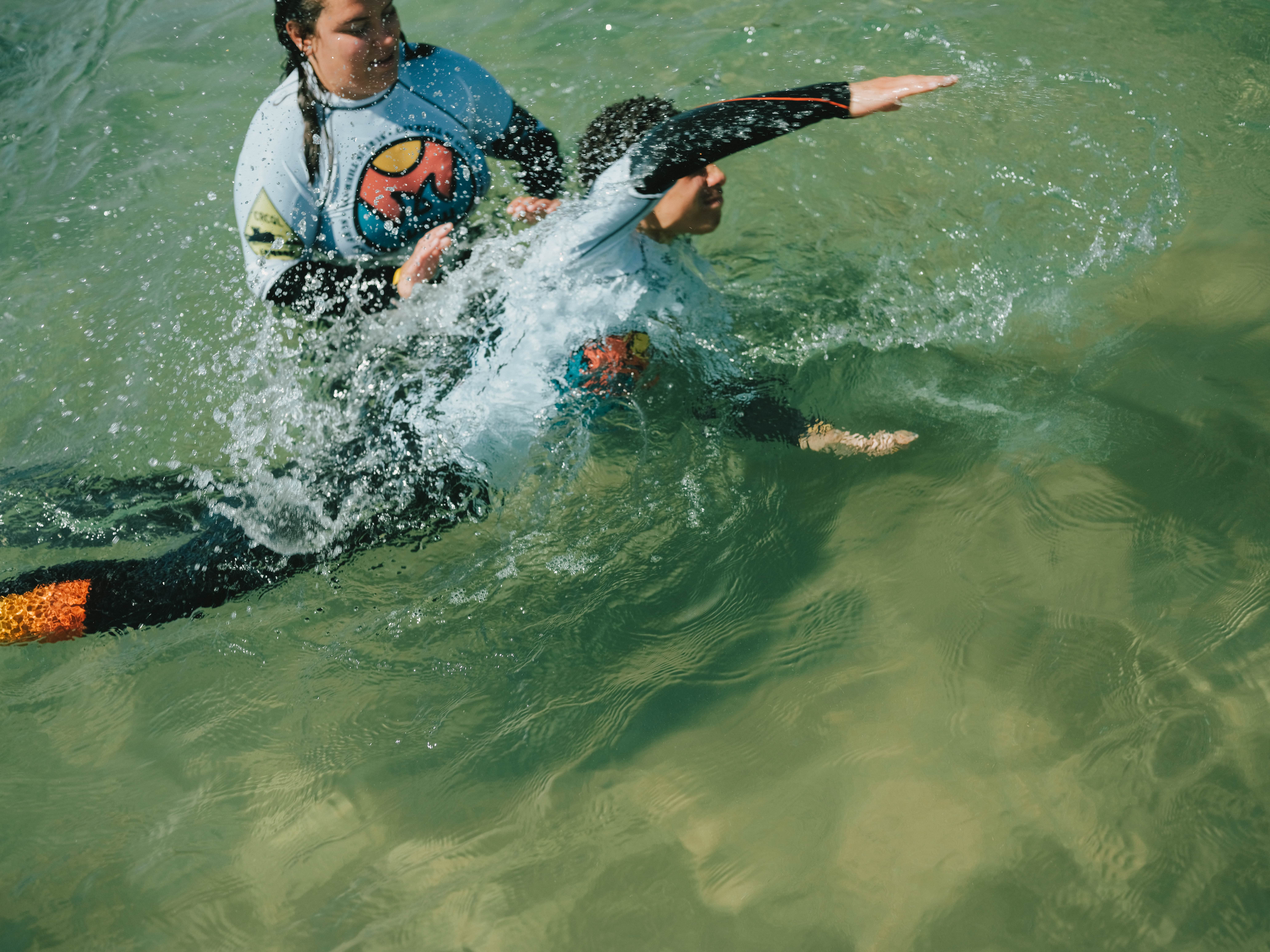 “The project uses the ocean for sure, but our main goal and ambition is to improve the lives of too many children still in Portugal today that live in institutions, who were removed from their families,” says Evangelista. The children targeted for the intervention provided by Wave by Wave are children and young people that: are in temporary or permanent residential care, have been flagged by the Child Protection Services in Portugal, or are from 12 to 18 years-old in semi-open regimes or detained in juvenile detention centres (named educational centres in Portugal).

Children that come from a normative family context are also included which has been a goal of the project team from the very beginning, as Evangelista explains: “We have a lot of kids from institutions that need this support, but we also know that they are sick of always being in the same contexts of risk and surrounded by kids with a lot of problems. So, more and more, we have been asked to respond to families who have teenagers or children that need some sort of support and love surfing.” This is also a necessary and important aspect of the project, which the team would like to see grow.

Children in foster institutions or juvenile detention centres have also often experienced many unwanted changes in their lives and as such, the project aims at providing them with a crucial consistency. “These kids start with us at the beginning of the school year, and they are the same group with the same team for the whole year. We do not change this. This is where the consistency is very important. […] We try to reduce the number of surprises; we do not like surprises unless they are very good,” explains Evangelista.

Evangelista and her team are already able to see the positive impact the project has had on the children, particularly in certain external indicators such as behavioural issues and emotional regulation. From 2018 until last year, the project team ran a three-year randomized trial during which they could see significant improvement, “this trial really proved that the kids improved their pro-social behaviours, emotional regulation, and behavioural problems.” Nevertheless, they would like to be able to further establish the impact of the project, but this requires more time and resources: “We see the impact, we see it in the things they say, and we wish we had more time, partnership and research,” says Evangelista. 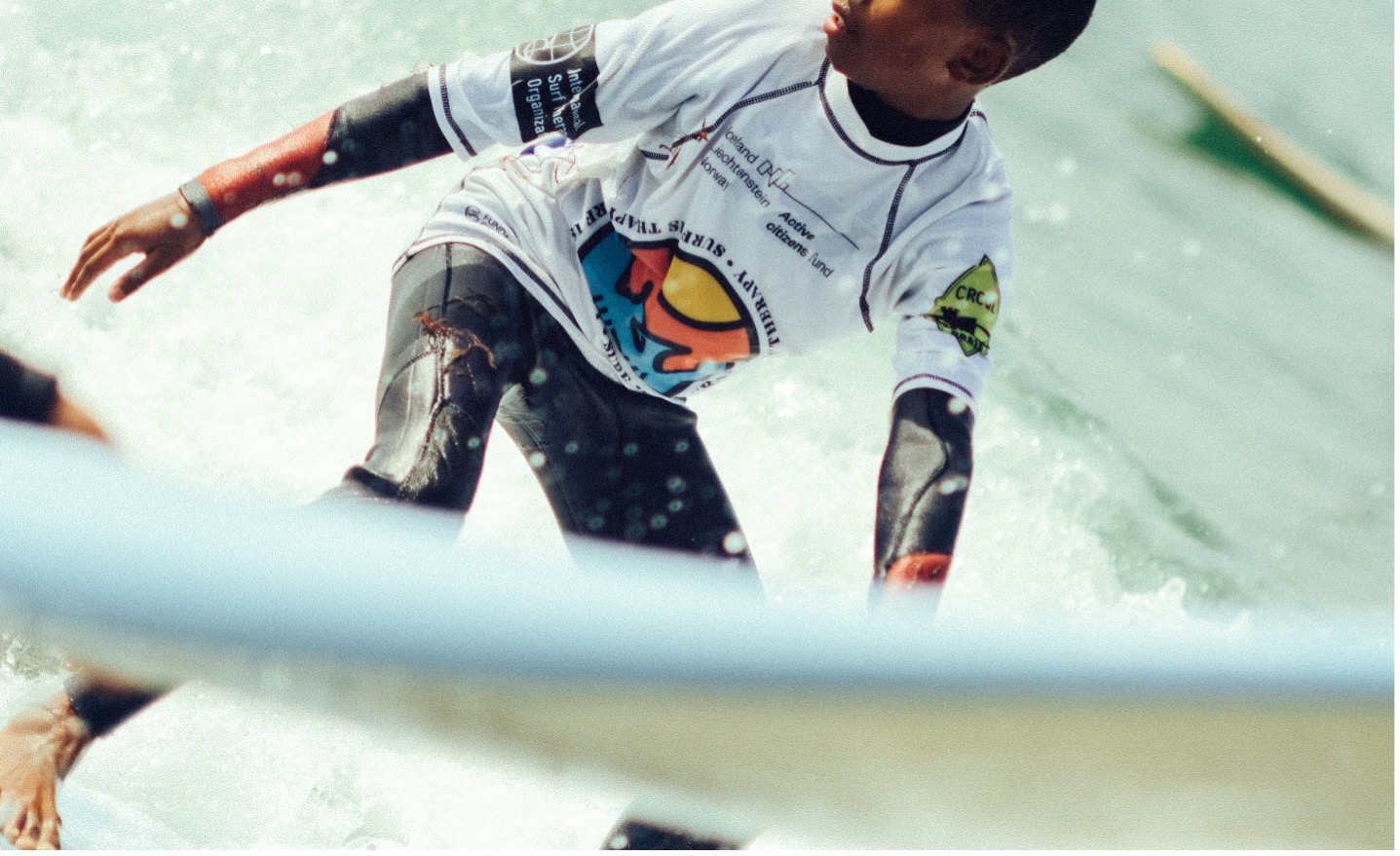 Broadening the scope of the Wave by Wave project

After several years of operating only with surf therapy, the team now plans to broaden the scope of the project with support from the EEA Grants through the Active Citizens Fund: “The funding we got from the EEA Grants has allowed us to do something that we have always wanted to do. […] It will fund the Wave by Wave Youth Forum which will start in January,” says Evangelista.

“The funding we got from the EEA Grants has allowed us to do something that we have always wanted to do.”

The Wave by Wave Youth Forum will be open to children who are over 16 years-old, and the main goal will be to teach children about their rights and provide them with the means and opportunity to voice their concerns about foster institutions. “The basic proposal is to work with the idea of basic rights. We have a partnership with the local council and with UNICEF, and they are going to help us have sessions with them, to make the children aware of their basic human rights. After that we have three goals: 1. To write a manifesto in ten points, 2. To be the Committee in charge of organising the end of the year party where the children are invited to share their talents, 3. To make a documentary.”

The Youth Forum broadens the work of the Wave by Wave project, allowing the children to become active participants of the change they want to see in their society. “It changes the scope. Before, we used to define ourselves as a therapeutic intervention through surf therapy, using the ocean and surfing as therapeutic mediators. Now we define ourselves as a humanitarian platform for social justice, using the ocean for mainly kids at risk,” says Evangelista, who further underlines that working with children in these situations requires such changes as the mental health intervention is only a small part of what the children need.

“One of the most important aspects is that when people hear about the project they focus very much on the surfing, and obviously the ocean and the surfing is so important for everything that we do, we cannot do the work that we do without being at the beach and in the ocean. But our goal is bigger than that. It’s not just giving them a surfing experience; we are a mental health and surfing team. We are very aware of how their basic rights need to be supported.”

“But our goal is bigger than that. It’s not just giving them a surfing experience; we are a mental health and surfing team. We are very aware of how their basic rights need to be supported.”

The Wave by Wave Youth Forum through the Wave by Wave project is funded by the Active Citizens Fund which supports civil society by strengthening its role in promoting democratic participation, active citizenship and protecting human rights. In several of the Beneficiary States, the EEA Grants is one of the most important contributors to civil society.

Find out more about the Active Citizens Fund in Portugal.

Curious to know what projects we fund in Portugal? Find out more here