The Police: Our mind-set and attitudes towards the Roma has changed

Making the police more knowledgeable about the Roma communities they are working in, is helping Bulgarian police officers treat the Roma differently and better enable them to deal with their problems. 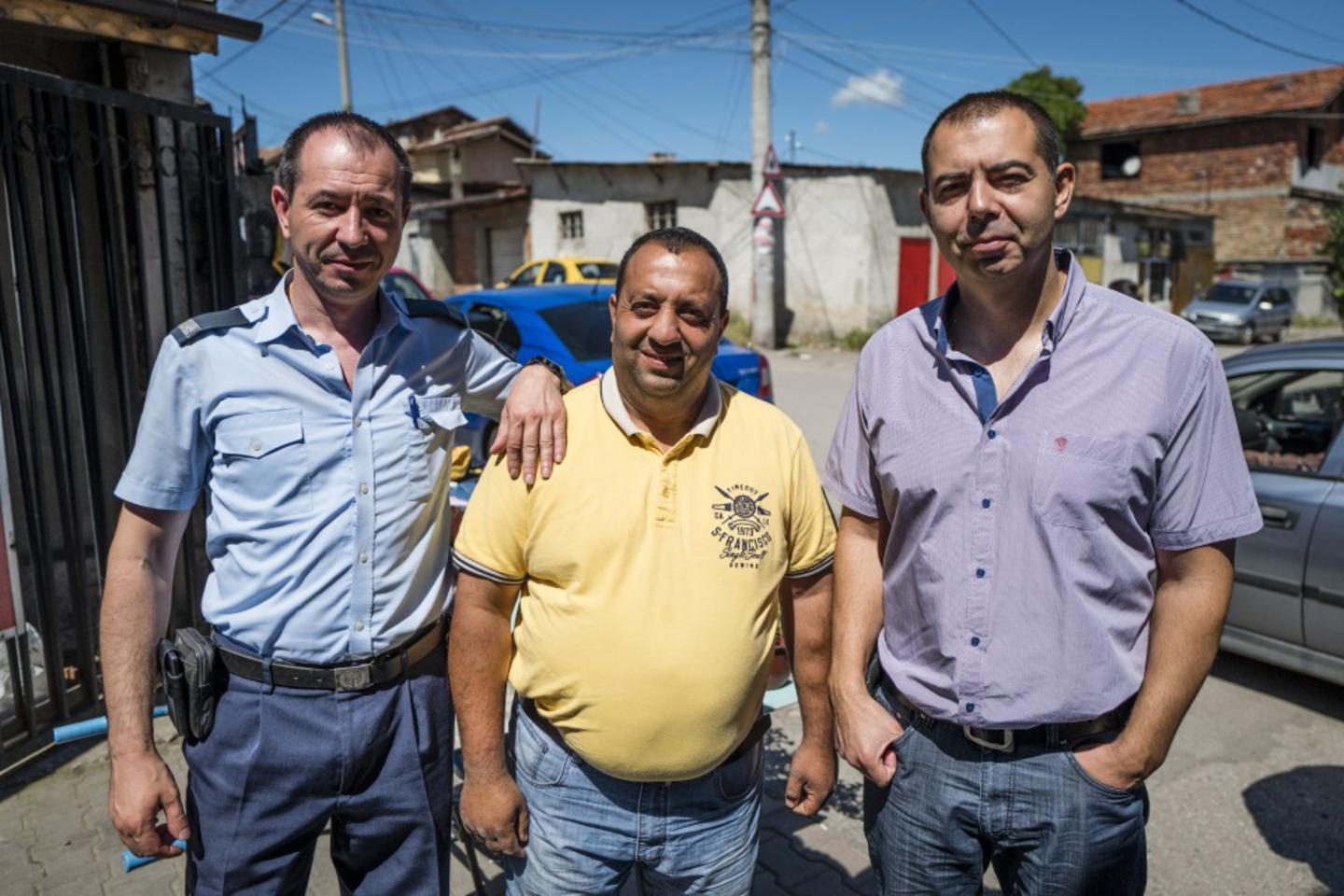 On the muddy street outside the police station, people are passing by. A man comes up to Rosen Georgiev and starts to talk, hoping that the police officer can offer some help to his problems. Georgiev is head of the police station in the Fakulteta district in the outskirts of the Bulgarian capital Sofia. Fakulteta is home to around 35 000 people, most of them Roma, making it one of the country’s biggest Roma neighbourhoods.

Georgiev nods and listens to the man. It is clear that he is a well-respected and trusted man in the neighbourhood. Later, when we accompany the police officer to the local market, he is approached and greeted by local people every step of the way.

How can young people be empowered? Read about the Youth Centre in Stara Zagora centre that offers human rights education and leadership training to disadvantaged youth in Bulgaria.

“I work in a Roma neighbourhood, I should try to know more about them, to understand them better. This helps me to do my job better,” Georgiev says.

He is one of more than 2400 police officers in Bulgaria that has received training in order to increase their skills and knowledge, especially related to working in multi-ethnic environments such as Roma neighbourhoods. Special focus has been put on protection of human rights and the use of force and firearms.

The trainings were held by experts from the Council of Europe and police working with Roma in the United Kingdom and the Czech Republic. Bulgarian experts of Roma origin also contributed to the trainings. From the Roma themselves, the police officers learnt about Roma culture, history, traditions, values, subgroups and group dynamics. Their feedback testify that the trainings were perceived as useful. The fact that Roma people themselves contributed to the training gave more knowledge and background about the problems faced by the Roma.

“As a result of the training, our mind-set and attitudes towards the Roma has changed. We know them better and approach them differently now – and we are better equipped to deal with local problems here in the neighbourhood,” says Georgiev. He explains that, over the years working in the district, stereotypes about the Roma that are hard to overcome have developed. The training has helped fight these stereotypes.

Of the nine police officers working at the police station in Fakulteta, one is of Roma origin.

Enhancing the skills of the police

The project works to prevent and reduce the incidents of human rights violations by police acting in multi-ethnic environment, with special focus on the Roma population. The project also aims to enhance the skills of police to adhere to human rights while using force.

“We have a big Roma population in Bulgaria and many police officers work in Roma neighbourhoods. We need to improve their knowledge of the Roma and how they can work with them in the best way. We don’t want to have problems with the Roma community, and we want our police officers to work in accordance with international human rights practices,” explains Milorad Yordanov from the Academy of the Bulgarian Ministry of Interior. The Academy is managing the project supported under the ‘Schengen cooperation and combating cross-border crime’ programme funded by Norway.

The programme contributes to improve the capacity of the police, the border police and services in fighting crime in Bulgaria.

Good cooperation with the Council of Europe

In addition to training for police officers, an analysis of the Bulgarian legislation covering police working in multi-ethnic environments, including protection of human rights, the use of force and firearms, was conducted. Based on that, a manual was prepared and distributed to police stations across the country.

“The main feedback has been that the training was useful. The opportunity to meet colleagues from different parts of Bulgaria to share experiences from working in Roma communities was also appreciated,” Yordanov explains. Training rooms have also been renovated as part of the project.

“The cooperation with the Council of Europe has been very good and fruitful,” Yordanov concludes.

Through the EEA and Norway Grants, Iceland, Liechtenstein and Norway support a wide range of initiatives and projects in Bulgaria. Read about some of them here:

Through exhibition kiosks and quizzes on the digging sites, the goal is to make the inhabitants of Sofia curious about their history. Read about the important work that is being done to restore, preserve, and protect three buildings of cultural heritage value for future generations in Bulgaria.

How can production become more efficient? Read about how InterConsult Bulgaria (ICB), together with Norwegian partners, has developed a system that monitors the maintenance of industrial machines in a more cost-effective way.