EEA and Norway Grants 2014-2021: Working together for a green, competitive and inclusive Europe

Iceland, Liechtenstein, Norway and the EU today signed the agreements on the European Economic Area (EEA) and Norway Grants for the period 2014-2021. 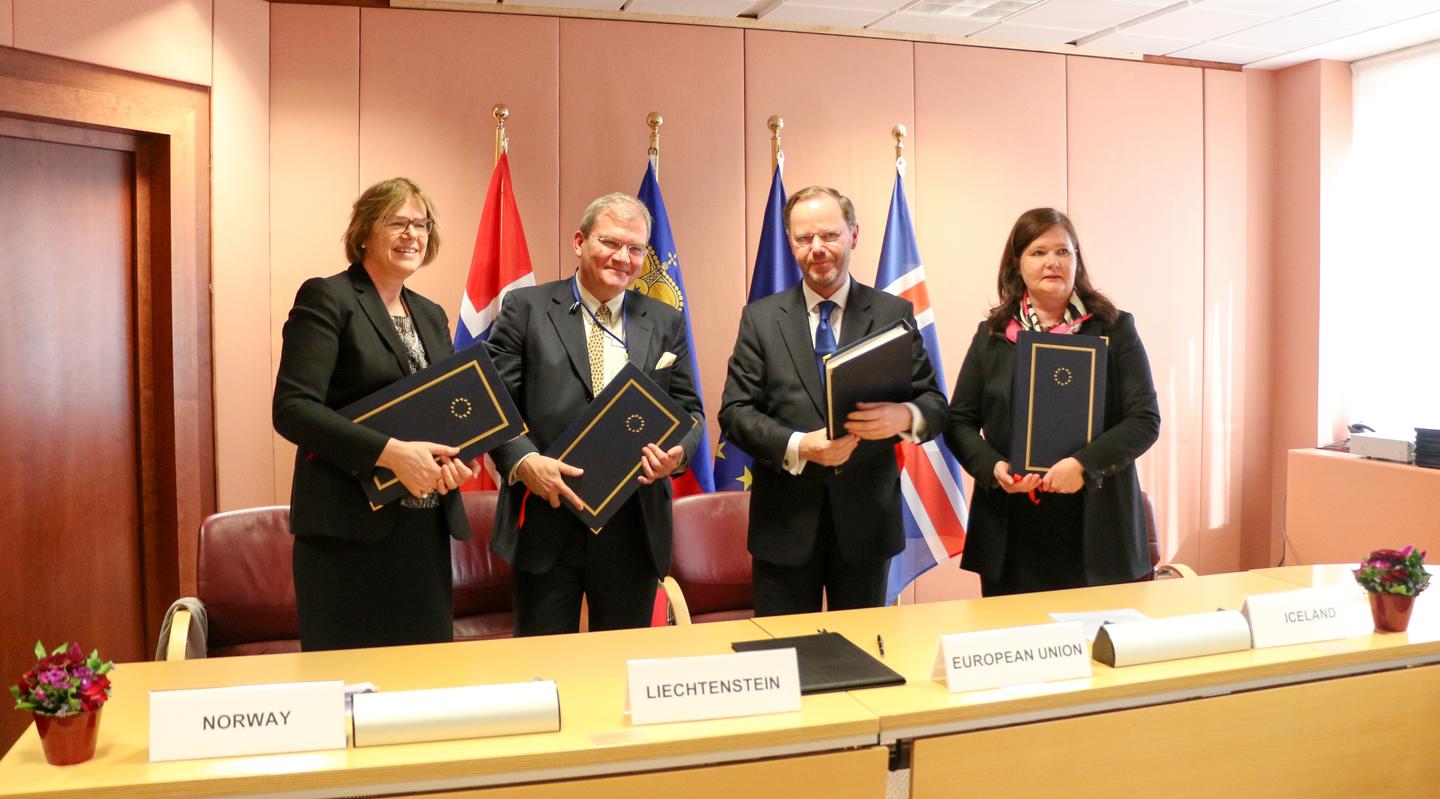 In the new funding period, a total of €2.8 billion (€1.5 billion through the EEA Grants and €1.3 billion through the Norway Grants) will be made available to 15 EU member states to reduce social and economic disparities and strengthen bilateral relations with the three donor countries.

“In the coming years, the EEA and Norway Grants will primarily be used to promote innovation and growth in Europe through cooperation between Norway and the beneficiary countries,” said Norwegian Minister of EEA and EU Affairs, Elisabeth Aspaker.

“I am confident that the new extended financial mechanism will bring forward even more strategic use of funds, a stronger impact on commonly set goals, supported through partnerships of mutual interest,” said Minister of Foreign Affairs of Iceland, Lilja Alfreðsdóttir.

“Now that the Agreement has been signed, I hope that the necessary Parliamentary approvals can be obtained soon, so that we can move towards practical implementation. I am confident that the programmes and projects in the new period 2014-2021 will make a tangible contribution to reducing disparities in the EEA,” said Minister of Foreign Affairs of Liechtenstein, Aurelia Frick.

Since the EEA Agreement entered into force in 1994, Iceland, Liechtenstein and Norway have, through various grant schemes, significantly contributed to social and economic cohesion in the EEA.

The priorities for the 2014-2021 funding period reflect the major challenges facing Europe and align with EU priorities:

The support is divided into two schemes: one funded jointly by Iceland, Liechtenstein and Norway (EEA Grants) and one funded by Norway alone (Norway Grants).

The funding will be made available to 15 beneficiary states in Central and Southern Europe and the Baltics.

*The EEA Grants are jointly financed by all three donors, where contributions are based on their GDP. The estimated share of contributions equates to: Norway (96%), Iceland (3%) and Liechtenstein (1%).

A new feature of the 2014-2021 period is the establishment of regional funds to tackle youth unemployment (€65.5 million) and promote regional cooperation (€34.5 million).

The consultation process on the priority sectors and programme areas will start at the end of May. Shortly after that, Iceland, Liechtenstein and Norway will enter into negotiations with each of the beneficiary states to agree on which areas will receive funding in each country, resulting in the signing of individual Memoranda of Understanding (MoU) with each of the countries.