Combatting domestic and gender-based violence together

Through the combined efforts from colleagues within and outside the justice chain in both Norway, Lithuania, and abroad, the first of the scheduled workshops took place in Birštonas in Lithuania in April 2022. 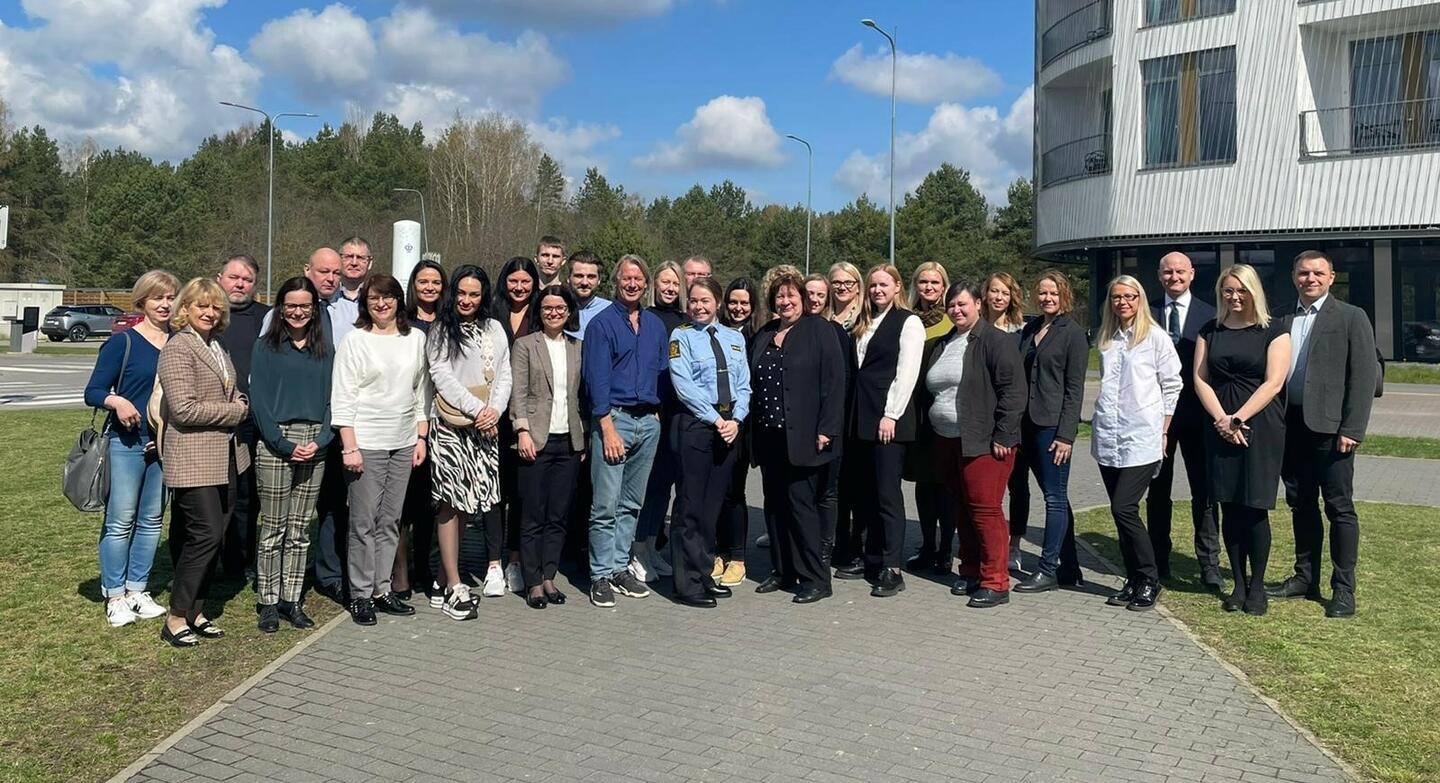 This article is written by Oslo Police Superintendent Renate Sætre. Renate works in Oslo as a coordinator for the PDP4 project against domestic and gender-based violence in Lithuania, in a project-based position lasting until January 2024. She has worked for the Norwegian police service since 2015, with a varied background from both patrol duty and as a detective.

Lithuania faces many challenges in the ongoing effort to reduce the occurrence of domestic and gender-based violence. More than 58,000 calls about these types of incidents took place in 2020, and the real number is believed to be even higher. There is a documented need for strengthening the methodology used when handling these cases, through all links of the criminal justice chain. Unless all links of the chain work together on this task, the process will be unsuccessful.

To link that chain, the very first workshop for a predefined project under the EEA and Norway grants Justice programme in Lithuania brought together representatives from the police, the prosecution service, and the national courts administration as well as practising judges from all over Lithuania.

An outside perspective – from both sides

To bring different perspectives to the workshop, Lithuanians were joined by colleagues from Norway, Finland and the United Kingdom. How different is the work against domestic and gender-based violence in different countries, and what ideas can we take and implement from each other that we had not thought of already?

In the opening lecture of the workshop the topic centred around going through the changes that have taken place within the investigative field and how domestic violence cases have been handled in Norway over the past ten or so years. The current approach has been developed over time and has been subject to scepticism, criticism, reviews and retracing steps. Telling this story was important. Just as important as leaving the floor open to discuss not just the good that each person working in this challenging field does, but to question our working methods and be open to the possibility of change.

This became a central topic for the workshop as a whole. With the questioning title, Is domestic violence more than a private matter? the participants were challenged on how they currently view the victims, perpetrators and the cases and what can be done to make a change where this is not in their best interests. Some may still view domestic violence as something for people to deal with privately, and not worth spending public resources on resolving. As speaker Solveig Bergman from the Norwegian centre for violence and traumatic stress studies pointed out, the statistics on the costs of domestic and gender-based violence state otherwise. Every year victims are prevented from taking part in the workforce and leading an active life due to illness and trauma caused by domestic violence perpetrators or simply prevented from taking part in the rest of society by their controlling partner, as illustrated in the lecture by the speaker Rebecca Zerk from Aberystwyth University. Research presented by speakers Jørgen Lorentzen and Hanne Finanger shows that many violent adults were once children who witnessed violence in their childhood homes.

Breaking the cycle of domestic violence is a massive challenge. It is a challenge for the victims, the perpetrators, and the loved ones who witness it, and it is also a great and important challenge for legal practitioners working in the justice chain. The question is then, how do we face it?

Having practitioners - from first responders to prosecutors and judges - together in the same room opened the possibility to see the perspective of the other and to ask why things are currently done in this or that way. Together we were able to find a lot of valuable insights and answers to these questions. However, as the participants were reminded throughout the workshop, the elimination of domestic and gender-based violence is a long term and continuous process.

The workshop was part of the project Improving Work Quality and Enhancing Competences of the Justice Chain to Protect Victims of Domestic and Gender-Based Violence, funded by the Norway Grants. The project will last until January 2024, with future workshops and events currently in the planning stages. If you would like to be part of this project either as a speaker or contributor, the coordinators would like you to get in touch with you. Click here to leave your contact details and the project coordinator from Norway, Renate Sætre, will be in touch with you shortly.